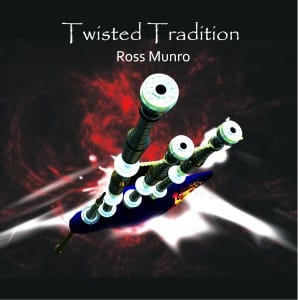 Ross Munro has to be one of the best pipers in Scotland,  he retired from his job as the Pipe Major of The Royal Scots Dragoon Guards last year and so allowing the time to finally record his long awaited debut solo album Twisted Tradition. 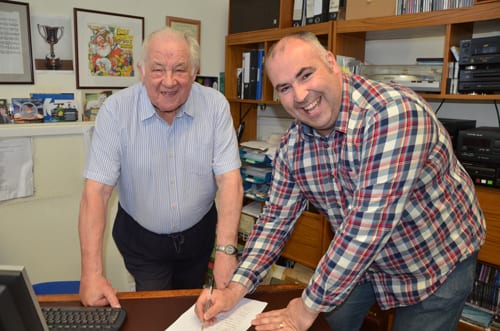 Well all his hard work has paid off as the hot news is that after an introduction by us at Offbeat he has just signed a recording licensing contract with  Greentrax Records, who will be able to distribute the album worldwide to all of Ross’s many fans.

And so Ross came to Offbeat Studios as he had worked with Iain McKinna before on a very successful series of albums called Spirit Of The Glen for Universal Music Group and Decca Records which were historic in the making, combining a whole orchestra with the sound of The Royal Scots Dragoon Pipes & Drums. It became a no1 hit album in the Classical charts and won a coveted Classical Brit Award for best album in 2009. It was produced brilliantly by Classical genius Jon Cohen. Iain at Offbeat recorded the pipes and drums for it while Jon Cohen arranged all the music and following the initial recording went to Prague to record and produce the Czech National Orchestra.

Ross adds “When it came to recording this solo album I did a search on Recording Studios in Edinburgh and Offbeat was the first to come up in my search, When I opened the webpage and was confronted with a picture of Iain, I thought it was too spooky a coincidence to ignore, especially after working with Iain on the Spirit of the Glen Trilogy whilst with the Royal Scots Dragoon Guards”.

Twisted Tradition is a unique album and the superb tone Ross achieves on his pipes creates such an emotive and stirring sound you just want to hear again and again. There is such a happy vibe to some of his tracks and other tracks almost move you to tears with the emotion. Here at Offbeat we feel he has truly created something really special, and there are many fans all over the world dying to get their hands on it. When asked what made him come up with the idea for the album Ross says,

“The idea started of as a personal project as I was only looking for a product I could sell at weddings and other small events that I may have been booked on. It was after Iain had listened to the demo tracks that he recommended that I looked at going commercial as he thought I had a very sell-able product”.

He has been very skilful on this album by merging the evocative blending of the pipes and the whistle (which he also plays) giving some tracks a twist and a haunting tone which evokes a truly moving performance, Ross just has brilliant skill and timing unique to him.
He started recorded a lot of the backing at his home studio here in Edinburgh, including keyboards and programming  so when he came to record the final takes at Offbeat the recording process was really speeded up and I have to say the album was completed in record time, partly also due to him knowing his material so well, his intricate playing on some of the tracks as well as other tracks with a more modern backing gives this album a unique flavour. Ross adds,
“The music was mainly created using Cubase Elements and my Korg M50. The ideas behind a lot of the tracks have been ideas that I have had in my head for a number of years but have never had the chance to get them out due to restrictions of previous employment. However after leaving the Army, I found I had the chance to eventually get the madness from my head”.