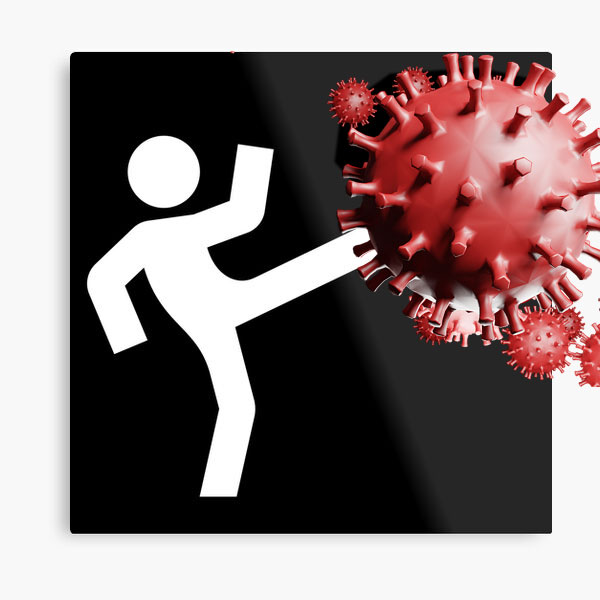 Our diversity strategy seems to be helping us get through this pandemic.

The range of projects we are involved in can only be described as... OffBeat!! 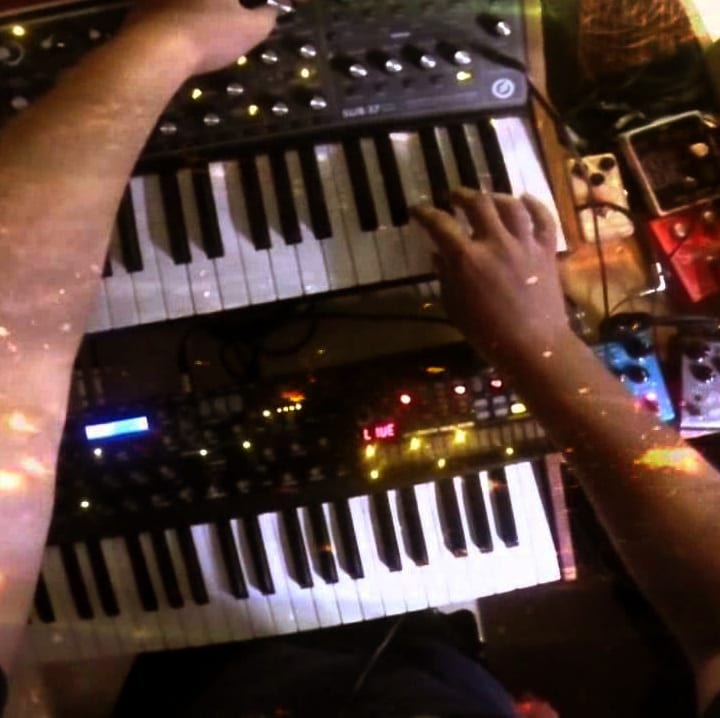 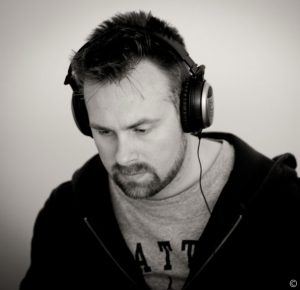 Surviving Covid is no mean feat for any recording studio but the mad diversity all of our projects here at Offbeat is helping. We have virtually lost all of our group events here at the studio but are beginning to make some headway in other areas.

We welcome our new Audio Producer Nik Paget Tomlinson to Offbeat (pictured). Our long association with Nik goes back to our days at Edinburgh's Sonic Studios in the late 80's when, at the age of just 14, his Mum Lilly brought him in to Sonic to see how a studio operated.
Nik is a great musician and a technician and since then, has many years experience in Music, Audio for Theatres & Recording Studio work. 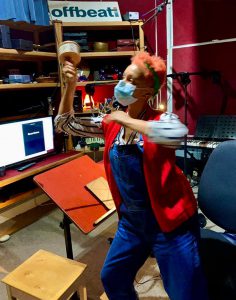 BBC Radio 1. We were super excited to have BBC Radio Presenter Gemma Cairney in the Offbeat studio on 11/11/2020 recording interviews over Zoom with various artists. Gemma presents the early breakfast show as well as presenting shows for BBC Radio 6.
This session involved recording links, scripts and three interviews for BBC 6 Introducing.
Producer Bruce Munro zoomed in to produce Gemma, and Nik and I captured the audio.
Gemma was genuinely warm, friendly and easy to work with and said she loved the Offbeat vibe! 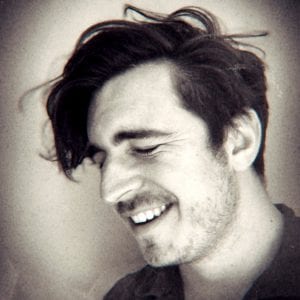 Being involved in adding Guitar & Bass and mixing and mastering to Richards stunning debut album is a huge creative buzz.
His songs and production are amazing and we  have a very easy working relationship, despite working remotely "using only telepathy".  I'm adding Guitars, Bass where needed.
Richard works from home in Auchterarder and is a brilliant singer, keyboard player, programmer & songwriter. 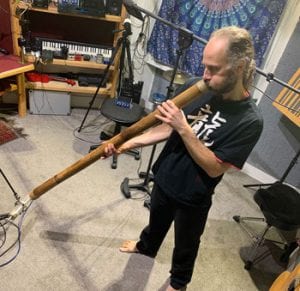 Majk Stokes - New Tracks
Majk is back! In the studio to start some new tracks in his inimitable quirky style. This could form the start of a new album for release in 2021. Offbeat recorded the last two albums by Majk (Pronounced Mike). One of the new tracks he recorded in November involved the sampling of Majk's Squeeky Eyeball which was sampled and integrated into a drum track...nuts!!..YES... but highly effective and amusing.

Al Jazeera are making a new series of Earthrise and we are recording the commentary of presenter Russell Beard again.
We have been lucky enough to have been involved in the past 5 series of this amazing series and the various awards the series has earned has reflected back on Offbeat in a very satisfying way.
Very proud to be a part of a programme that highlights eco solutions and climate issues Worldwide! 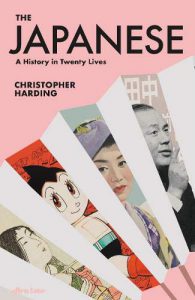 Offbeat is now the main audio book production studio in Scotland. We Started off the year recording two audio books for Canongate Books. Bobby March Will Live Forever by Alan Parks and The Red Red Snow by Caro Ramsay.
We recently produced three more audio books, including :
The Island by Ben McPherson for Harper Collins which was beautifully read by Steve Worsley,

The Japanese, a History In 20 Lives by Chris Harding for Penguin Random House and author Janis Mackay's debut audio book
The Watchmakers Wife. The lovely book, read by author and storyteller Janis, is based on the life of her Grandmother in early 20th Century Edinburgh 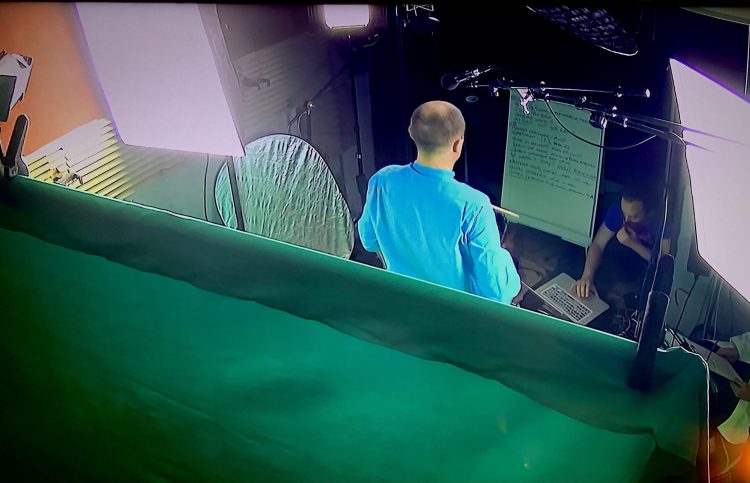 The Mindfulness Enterprise
The desire to help others, and see them happier and better equipped for life lies at the heart of The Mindful Enterprise. Building resilience, empowering and inspiring people, and offering real support is the foundation of their business.
Founder Gary Young came into the Offbeat studio in November with Robin Harris to film a series of Mindfulness for Kids videos against a green screen and expertly filmed by Tomas Sheridan from Polifilm. 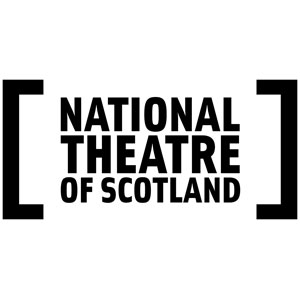 As well as producing audio with partners Bright White, Unesco & Creative Informatics - for an AR project for John Knox House featuring an Augmented reality experience from an extract of the novel The Way Of All Flesh by Ambrose Parr, we  also recording the audio for a 2021 National  Theatre Of Scotland production of The Ghosts, an AR project written and directed by Adura Onashile, with music by Niroshini Thambar and Audio production by Nik Paget Tomlinson.

Voice Over Showreel & other Promo Videos

We produced an updated VO and A/V showreel back in August. Highlighting lots of projects we've been involved in. 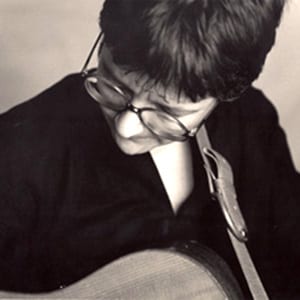 We are now on the final track of the album entitled Waylands Farewell (with a guest appearance by Colin MacFarlane on Slide Guitar and Guitar Drones) and Offbeat is now working remotely with Allie who lives in Selkirk in the Scottish Borders. The album could potentially get in the Guinness Book Of Records for being the longest album ever to produce - but it might just get pipped at the post by our own album Harmonic Overdrive (see below).

We started Allie's instrumental Acoustic Guitar based album way back in 2007 and it's been put on ice several times due to various health problems Allie experienced, but like good whisky, this album is maturing beautifully, and being a spirit with some substance, we are sure it will be a resounding success for Allie when it gets released...  In 2021!!! 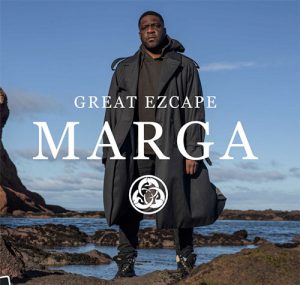 Great Ezcape EP 2020
Hip Hop duo Profisee & Vigilante have completed their latest EP of six songs and Offbeat has done the mastering for the project.
The guys have been working remotely on the project, Profisee from Edinburgh and Vigilante (aka Paul McKinna who happens to be my son) in Ottawa, Canada. Profisee performs the vocals and Vigilante creates the beats and produces the tracks.

Our own album has now been mixed and is finally complete.
We brought in Menno Froese from California based Ayaicinc.com to master the album and he did an amazing job using his own plug in creations Ceilings Of Sound and Mix Monolith to work his magic on the project.
The songs feature Kirsty McKinna on Electric Violin and Lead Vocals, Guitars, Bass, Keyboards and Vocal harmonies by yours truly
with drums by Tobias Haas.
And special guest Skyler Jett co-wrote Positive Vibes  which he also sings lead and backing vocals on with Kirsty. The artwork for the Sleeve (still to be Published) was Produced by Paul Wilson and the Sleeve illustration was created by Shuna Anderson.

We are about to press up CDs before we release the album on all digital platforms including Itunes, Spotify etc. Because we are extremely busy at the studio the promo for this will likely be a slow burn, but because this album took so long to make... hey...it's all relative! 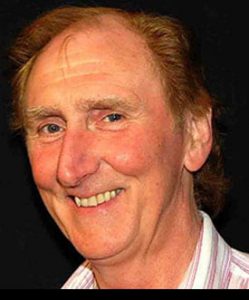 Recording a great collection of songs with Wilf which started a couple of years back. It feels like it's becoming an album organically. Wilf is a great guitar player with an armoury of great chords to write his songs with. He plays 12 string acoustic and instead of a plectrum he uses a fucking razor blade!!! Dangerous!! I accompany him on Bass, Electric Guitar, Keys and Drums.

I worked with Wilf on a bunch of demos back in Sonic Studios in the late 80's and hadn't seen him for 30 odd years when his email came through.
Guests on his tracks include Brass Duo, saxophonist John Burgess and Trumpet player Cameron Jay.
Wilf hosts a radio show on K107FM on Fridays and Saturdays every week.

Out Of View released their second single See Me Now in September. I mixed and mastered the track, with production by Dougie Bonnar in France. The vocalist was in Australia and the rest of the band were in Scotland. Read More 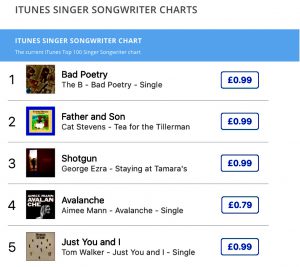 Last but not least, The B, musical project of Brian Lee, reached no1 on the Itunes Singer/Songwriter chart in September with his song Bad Poetry. Brian Played Acoustic Guitar and performed Lead and Backing Vocals with the Offbeat backing treatment of Electric Guitar, Bass and Drums or this vibey track. The song was recorded, mixed and  mastered in just a few hours!