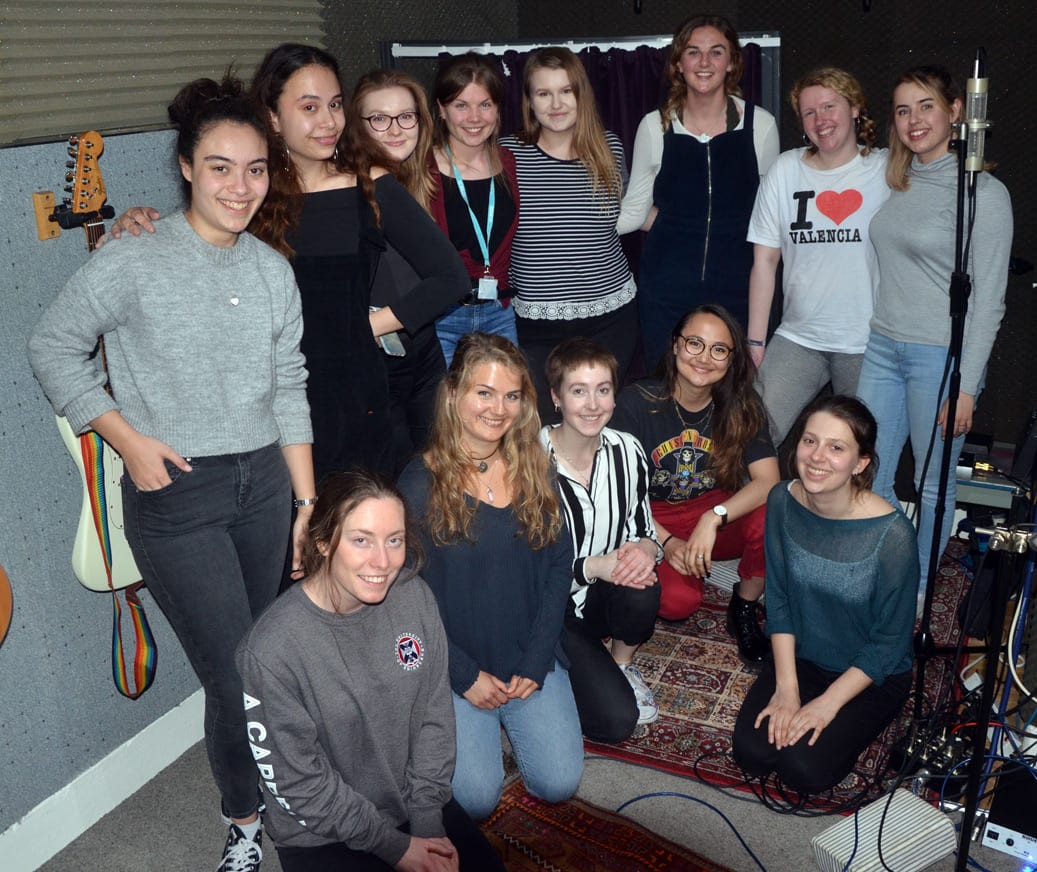 Over the past couple of months while we have had 85 Acapella vocalists in the studio recording in 6 groups for the Edinburgh University Acapella Society and the range of styles and talent have been remarkable. This post illustrates the various ways that the recordings have been conducted. 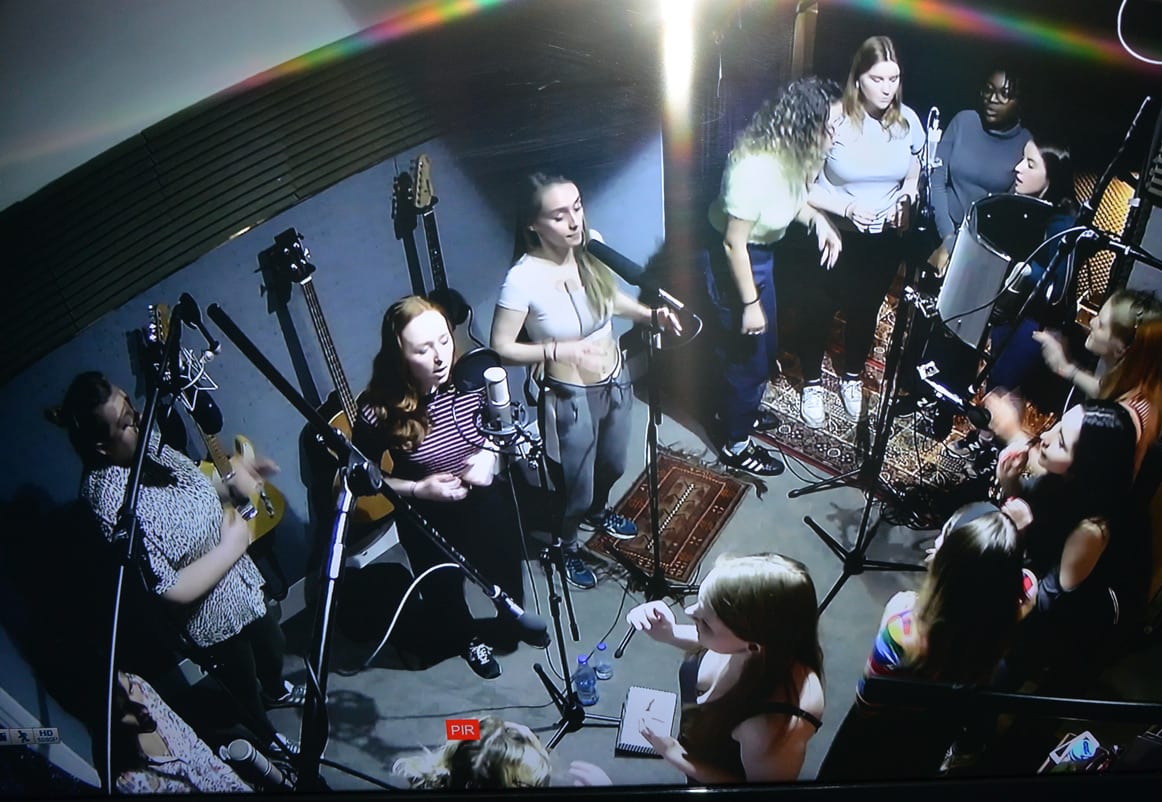 Nothing quite tests the functionality of a recording studio more than large group recordings which require multi-microphone setups.

A male group of 18 singers, Cloud 9 started the session singing a few tracks together as a group. We set up 9 microphones, some of which were shared.

A Coles stereo ribbon mic captured a group of 4 singing Alto parts. A Nuemann U87 &  Rode K2 and Rode NTK Valve mics were employed for soloists..

2 x Neumann KM84’s were used for groups of two and a AKG Solid Tube was shared also. A Sennheiser …. was employed to record the human beatbox part as it easily handled close mic’ing with high sound pressure levels.

Following this, it was decided that the group wanted to record a song in separate parts, so to keep them in time a metronome was fed through to the headphone amps along with an organ drone in the key of the song. The Bass soloist started off the track as his tuning was generally agreed to be the most solid in the group. Then separate parts were added, sometimes in small groups of two or three and the soloists completed the recording.

As with all the groups, the mixing for the recording (which took three hours) was done on a separate session, lasting a further two to three hours depending on the complexity of the material. With Cloud 9 most of the mixing session was taken up recording the track which was done separately as a high level of control was possible.

This female group of 16 decided to record all their songs together and focused spending all of the three hour recording session on getting their ‘live’ performances right. It was a really enjoyable session and the girls were on top form recording the following songs in their repertoire

They laid down several versions of each performance and also featured a human beatbox to terrific effect. MD Imogen Drummond did a great job of keeping the group in tune and focused on their performances throughout. The group gelled together beautifully and were pleased to get six really great mixes at the end of the process. Although the group elected not to record parts separately in some ways this was true to the spirit of a group recording.

We had to focus on the next takes of each song and in some cases the tuning of the singers was consistent enough to cut in parts of takes and edit them together. Using Logic Audio’s flexi tuning we were able to tweak small parts of the soloists performances, although this had to be done by ear as concert tuning wasn’t possible due to some understandable drifting during the performance.

Check out this extract of the recording:

The Edinbellas decided to record a track separately, like CLOUD 9 using a metronome and drone tuning guide and spent a considerable part of the recording session focusing on their version of…

The downside of recording with a click track and tuning reference is that the process of laying down tracks, although technically good, isn’t particularly enjoyable for the performers. To try and mitigate that we ran a shaker loop alongside the metronome to trying make the click track sound more musical. However once several parts are recorded and the track begins to take shape, we can reduce the volume of the click and drone and let the recorded parts dominate the recording for subsequent performers.

EUAC co-president Caroline Howard was the MD for the group and she kept the group up to speed throughout the recording.  Similarly to Cloud 9, most of the mixing session was taken up mixing the multi-tracked version of ….

A mixed group of 18 singers MD’d by EUAC co-president Kit Digby, Noteorious decided not to go down the route of using a metronome and drone tuning guide but focused primarily on a set of ‘live’ based recordings including

The latter was recorded minus the soloist who performed her part separately. She didn’t have any experience of mic technique and the astonishing range of her vocal was so dynamic is was hard to get a take that didn’t go off the scale volume wise. After several passes in which she was encouraged to back off the loud sections we finally got a vocal that made the mixing part easier.

Of course we could have squashed the performance with a Compressor and Limiter but by the time she got her mic technique under control it wasn’t necessary and the natural uncompressed sound of her voice came through nicely in the end.

While the singer was recording her part, the group went out into our stairwell and treated our neighbours to some beautiful rehearsals with the benefit of the extremely ambient reverb of an old Edinburgh tenement!

On the same song, Alex 'the human beat box' had decided not to lay down his part with the group and this made syncing up his part to a live version of the song with no obvious time reference tricky, however he pulled it off in the end but ideally this would have been recorded at the same time as the original group performance. Recording any rhythm parts on top of a live recording is difficult without any visual reference, especially on songs with tempo changes and free flow sections.

After that they took a novel approach to multi-tracking with a mashup version of Radio Gaga & Radio Killed The Radio Star by starting out recording a live performance and then replacing all of the separate parts in small groups of Bass, Sopranos, Altos and Alex’s Human Beat Box. This worked really well and was perhaps a better way to maintain the group vibe without the use of metronomes and tuning guides, whilst still having plenty control over the mixing stage.

They recorded the songs completely live, as they were a 4 piece it was fairly easy to control the performances which included

Can't Help Falling In Love With You, in which they were joined by another male singer
Coney Island
Smile
When She Loved Me
You Don't You Won't

A female group of 14 singers, Shirley Tempos were the last of this years Acapella groups and like all of the groups who recorded with us, they were also extremely  inventive and creative. They decided to focus on just four songs and after an hours warm up they decided to record versions of three of the tracks minus the lead vocal parts.

This was really effective as the microphones were used to good effect by allowing more mics per performer and by just working on the backing it was quite easy to tell which of the various versions of each song were the stand out tracks.

One song…. wasn’t possible to record this way as the backing wasn’t easy to time reference and performing a lead vocal on top of some non specific timings would have been problematic so it was decided that it would be performed completely live.

By the end of the session the group took away four really good tracks which wouldn’t require much mixing.